An algorithm for pointwise evaluation of polyconvex envelopes II: Generalization and numerical results 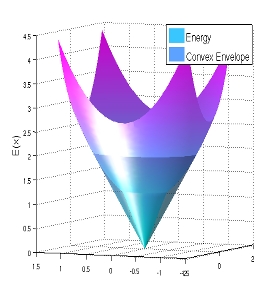 In the first part of this paper (Afrika Matematika 1–24, 2011) we introduced a method for computing the value of a polyconvex envelope at a given feed A0∈Rm×n. The method generalizes an approach for computing convex envelopes proposed by Michelsen (Fluid Phase Equilibria 9:1–19 1982; Fluid Phase Equilibria 9:21–40 1982), and later implemented by McKinnon and Mongeau (J Optim Glob 12(4):325–351, 1998). While alternating between a local and a global optimization phase, Lagrange multipliers from the former are passed on to the latter. Here we address the possibility that the Lagrange multipliers may not be well defined because the linear independence constraint qualifications are not satisfied. By computing the multipliers via linear programming duality we obtain a modified method that is guaranteed to converge under assumptions similar to the ones given by McKinnon and Mongeau (J Optim Glob 12(4):325–351, 1998) for the convex envelop. At the end we will present several numerical results obtained with this new approach.